A date with the Yeti

"Don't!" Mohit warned. My foot froze, hanging over a slyly disguised crevasse. My heart responded to fresh adrenaline, hammering blood at a frantic pace. There is no better feeling in the world.

A week ago I had been giggling at my cellphone and sipping coffee on my office bean bag. The term 'Software Engineer' comes from the Latin word 'sofoengi', meaning an animal which loves comfort.

What made a guy like me sign up for - ? Wait, no one cares about that. Let's ask a better question.

How much of the world have you seen?

This is what my heart was asking me when I landed at Dehradun airport. Let me confess that I believed in this stereotype: North-Indians are gun wielding maniacs who start pumping lead for no reason. The trip would prove that I couldn't be more wrong. They only pump lead when provoked.

Our cab driver couldn't shoot us with his hands on the wheel though, which did immensely for our confidence. He was also kind enough to drop us about a mile from our destination. With our 30 kilo luggage.

That is, if you consider people puking their guts out as 'uneventful'. Hell yeah, there were guys who were screaming for mercy every time the car stopped. Some tried to be macho by loudly praising the mountain terrain. They were soon spraying breakfast on it.

I would have focused more on the mountains had I not been distracted by the exceptional driving that was getting us to the base camp. Wide, spacious roads ensured a 3 inch safety cushion for the wheels.

From here, the real journey starts. The mountains are calm and huge. The snow capped ones are the most majestic, their height and beauty draw attention to them with ease. Here's proof: 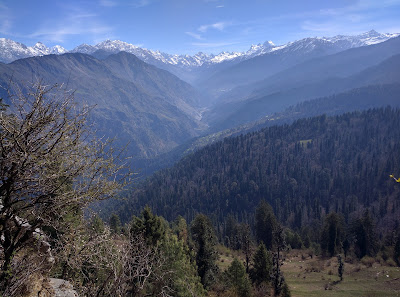 Our arrival at base camp was followed quickly by two remarkable events. First, the food by IndiaHikes was great. I don't know how they manage it, but their food quality and cooking is simply brilliant.

Second, we packed all necessary items for the trek. Anything which was related to bathing was wisely discarded. Anything related to smelling good was an indecent luxury. From my understanding, tissues and jackets seem to be the only important items. I am moving to the mountains soon.

We started the trek next morning to a warm sun and a big mountain-dog named 'Restless'. He smiled at me before saying "Get the fuck along." Eager to impress, I started moving very briskly. When we were clear of the rest of the group, Restless spotted something. He was barking and running downhill before I could react.

The Yeti are an ancient species. Despite reports of them harvesting men's testicles, the Yeti have maintained that they are for peace and harmony. I did not trust them entirely though. The way Restless ran suggested to me that he had a deep love for his reproductive assets.

My appreciation for my body magnified as I ran behind this mountain dog. Our trek guide spotted us sprinting towards the group, tongues out and eyes wide. Being the more reasonable of the two, Restless was calmed down and asked a few questions. It turned out that Restless had seen nothing. That son of a bitch. A polite smack to the rump sent Restless running back to base camp. 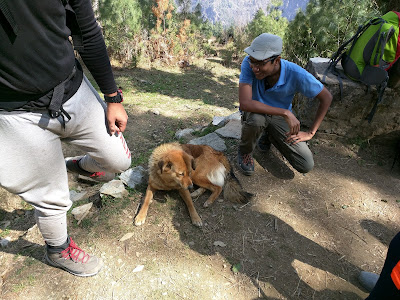 We reached our next camp in about 4 hours. People were discussing about the benefits of cannibalism when we saw lemon juice being served. All discussions were put on hold, and what followed was gulping juice while looking at this: 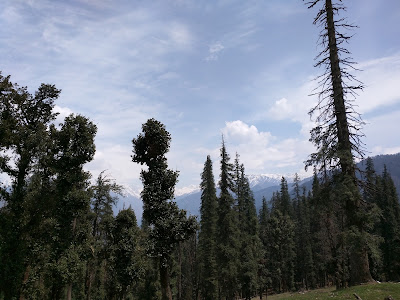 That lemon juice tasted incredibly good. Lunch followed soon after that. 3000 ft above the nearest village, we had food better than many restaurants at Mumbai.

The rest of the day was spent playing team games and snow fighting. 'Mafia' is the game of choice in these situations. My general personality convinced fellow trekkers that I needed to die. So when I was screaming my lungs out about being the Doctor, they wagged their fingers and had me murdered as a mafioso.

Having retired to our tents, we realised that the fun had just begun. A snoring trekker in the same tent as yours guaranteed an eventful night. Also, the required water intake meant going out in freezing temperatures to take a leak.

I won't get into too much detail about that. Simply put, gloves are too alien, and hands are too cold. When doing business, there is a constant fear that something is right behind you. I kept swinging my torch like a maniac.

The next day was comparatively peaceful. Thats because I fell sick. I had recently seen Wim "The Ice Man" Hoff on a TV show. He could get into a bath tub full of ice and keep his heart rate normal. He could run across the Artic in undies and still look good. All this because of some meditation nonsense.

I figured that controlling a single nerve in my body couldn't be too hard, and proceeded to sitting outside my tent in the freezing cold. Wearing nothing but a T-shirt and trek pants. Hence the fever.

Feeling fit by dinner, I marvelled at the night sky. The most beautiful sky I have ever seen. Photos pale in comparison to that moment. It felt bittersweet. I could see the constellations, a dictionary of mythology, and didn't know how to read it.

Speaking of stories, we come to the most awaited point of this trek. The day we climbed the summit of Kedarkantha. An apple, a pack of biscuits, and two litres of water would be our supplies for the 8 hour journey. Start time: 4:30 AM. 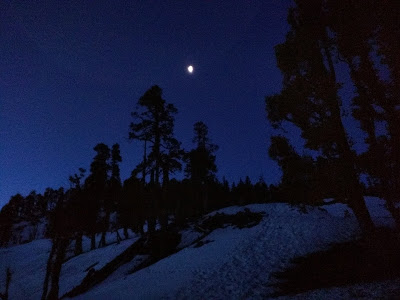 A brown blur swept past the virgin snow: A wild rooster. I swear Mumbai's cars are slower. What would happen if we met another animal known to live here: the wild boar? 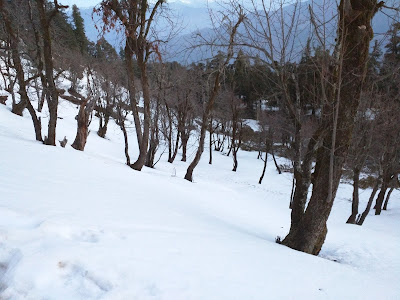 With that comforting thought, I watched the sun rise. The mountains are simply spectacular in the yellow light. 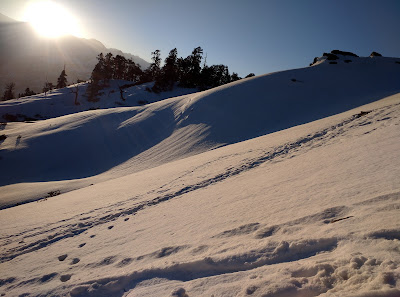 It wasn't long before our trekking party split into groups depending on trekking speed. Trekking speed is inversely proportional to the number of selfies a person takes. I took a few selfies before deleting most of them quickly. The mountains and I looked like Beauty and the Beast. Except that, I looked more like a geared-up monkey. 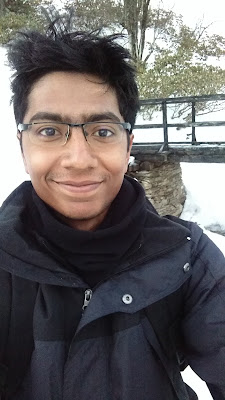 The lack of selfie stops left me with a lot of free time. Arvind gave me the thumbs up to move ahead of the group. "Move slowly so that we catch up with you soon" he smiled.

Within 20 minutes, I was so far ahead that I couldn't see a human in any direction. Giggling at my smartness, I figured that the peak will be about 15 minutes away. And I would be the first amongst this whole IndiaHikes batch to get there. Tears formed in my eyes at the thought of this great achievement.

Behind me were two kids, who introduced themselves as Mohit and Rohan. They were locals who trekked the mountains quite regularly. Impressed by my speed, they had decided to accompany me to the peak.

I looked for a way to throw them off a nearby cliff and make it look like an accident, but it was impossible. We started climbing at a frantic pace then, skipping places that I would welcome as rest spots. After 20 minutes, I looked at the summit again. It seemed 15 minutes away.

"About an hour or so. But we are moving slowly, so it could take an hour and a half." Rohan replied.

Every step I took told me of what I had known but never cherished. The Himalayas are a massive wall that holds the cold winds in the North. Their enormous strength lets the rest of India stay warm. On top of them, I was now a part of this wall. The wind tore at me till I was humbled and exhausted.

I asked Rohan to move on ahead. When I took my gloves off to have an apple, it felt like -10 degrees. Thankfully, taking a leak wasn't a 'freezing in mid air' spectacle.

The kids from the previous batch had buried tetra packs under the ice. Time to become a cleaning hero. Slow, tiring work. "There better be a cleaning award for this", I thought. But a few seconds later, awards were out of my mind.

No award was special enough for a guy at 12000 ft to collect trash. I do this only for the mountain.

After that, the summit seemed very close. I got there in about 30 minutes, greeted by Mohit and Rohan. On the way, there came a point when I nearly fell into a crevasse, as narrated at the start of this blog. 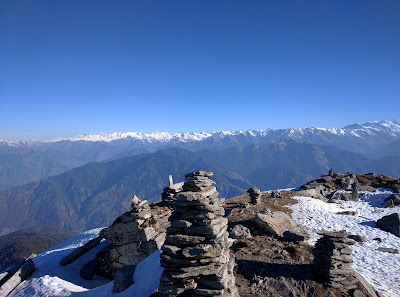 The rest of the trip went past like a blur. Rhododendron, Pine cones, etc...: 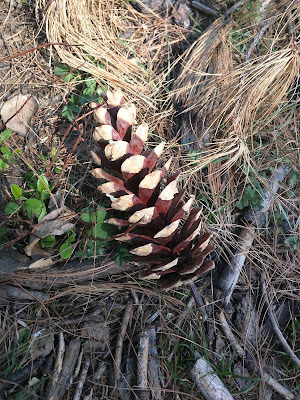 The photo makes me smile. It is so easy for anyone to miss this, and yet, nature can't help but be beautiful. She is, and we can only revel at and be humbled by her beauty. I pray that she never loses it.
Posted by gkcs at 01:43